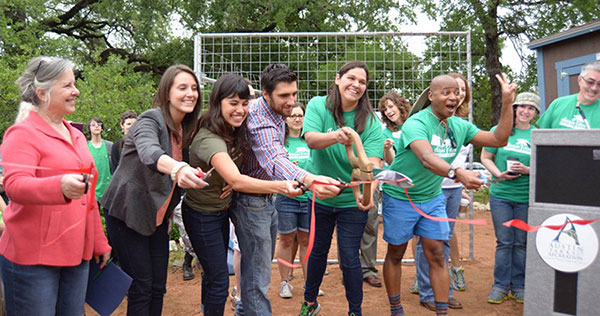 Began at Parker Lane United Methodist Church (PLUMC) as a typical community garden in 2009 with 10 plots (3 feet by 10 feet) gardened by families and individuals from the church and surrounding neighborhood, and an adjacent common garden managed by a coordinator with assistance from volunteers (15 feet by 40 feet). Gradually expanded year by year. Participation in plots declined in 2010 and 2011; by 2012, the entire garden space (approximately 50 feet by 80 feet) was managed by the resident garden coordinator with volunteer help primarily on weekend work days. Produce was shared by the manager and volunteers, but most of it was shared with the congregation following worship services, in PLUMC charitable programs, and through other charitable food pantries in the area. In 2014, members of the Austin Matu Community, a faith community of Burmese refugee families which was becoming part of the Parker Lane United Methodist Church, expanded the garden and managed the new area (approx. 20 feet by 80 feet) as a traditional collective farm growing their traditional crops in raised beds and involving the work of at least 50 members of the community. By 2016 the Austin Matu Community was managing the total garden space (approx. 80 feet by 80 feet plus small peripheral plots). Their skilled and diligent gardening was significantly more productive than the previous efforts. The produce is shared by the Matu Community and with the larger PLUMC community and its programs.